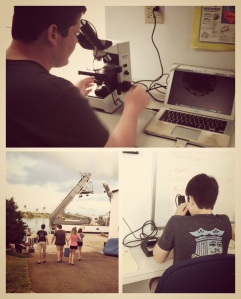 Today we began bright and early with one of my favorite dives that we have done so far, an exploration of a shipwreck named the Marraria. This dive was especially interesting because of its large array of different species of coral and fish. For one instance there was a male sergeant major that had turned colors from being black and white like a zebra to all black. This was because the fish wanted to look scarier and it became more aggressive. I found this interesting to see how the fish were capable of changing colors for defensive purposes. We later explored a very interesting part of the island where we had the amazing chance to jump of a rather large cliff. This was very fun for everyone even those who may have been a little nervous at first. After a series of jumps we continued deep into the forest and tried a new fruit which was very sweet and tasteful. We continued to explore and eventually came to a cave that was filled with water.

We got our snorkels and jumped in. This was my favorite part, it felt as though we were explorers finding the unknown. Exploring new places that no man had ever seen before. We headed home feeling proud of our accomplishment and ready to start our lab on  plankton which was very interesting. We looked under a microscope at different species we had caught during our morning dive and found many tiny odd looking fish bouncing all over the place. While it was a little difficult to follow some of the organisms it was very amusing and educational for some species of fish. We  finished the day feeling victorious and ready for another day of exploration.