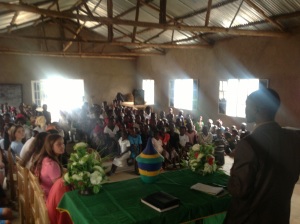 Today we were blessed by the village of Cyabatanzi in ways that may not be fully appreciated until sometime down the road, which is often true of intangible blessings. We drove early to attend the church service at the recently completed “new” church in the village, finding that the choicest seats in front next to the minister and worship leaders were reserved for our group. All of the other wooden benches were filled with parishioners who would still be worshipping until mid afternoon. Several young boys helped to add a musical accompaniment (mostly repeated I, IV, I, V7, I chord combinations) whenever the pitch seemed to fit, a toddler clapped and danced apart from everyone in her bright orange dress, men clutching New Testaments and wearing their Sunday best nodded and prayed, and women smiled with curious, welcoming eyes.

We had met many of the villagers the previous day, but this morning felt different. Caroline explained it this way: “Before I felt like they were watching and sort of judging us, but in the church service I felt welcomed and like we were really part of their community.” The choir sang a special song for us and then allowed the students to return their gift of song, all of it more lively than Easter Sunday. Winnie, a young Rwandan woman, translated as the minister read a passage from Isaiah mandating that we defend the widows and orphans, the minister prayed in superlatives that didn’t need translating, and the offering was taken. After that, people started bringing up other gifts – bags filled with corn, papaya, avocados, sugar cane, squash. These were auctioned off to help raise more money for the church.

When several students began bidding, I worried that we were taking food items that someone in the church needed much more; but immediately after the service, Sean Fletcher (Stanwich lead teacher) pointed to the house the village had built for its widows and orphans two years before and said, “We’ll bring them there.”

Walking up to the classrooms to begin our painting, I had a new understanding of what it means to look out for the most vulnerable members in the community. As the students began prepping the walls using water and rags, swept the floor with a broom made from twigs, mixed paints while village leaders attempted to hold the children back, it seemed like we were engaged in something simply and profoundly human. A crowd gathered and stayed for hours – children peering in windows and reciting their numbers in English, women cooking and sharing ears of corn, village supervisors checking to make sure our work wasn’t impeded by the crowd.

What did we take away from today? The simplicity of a gift of song, crude work tools for cleaning, primary colors mixed to make a limited palette, and the joy of working together to make something so much bigger possible. In January, when the children run to peer through the windows again, they will be blessed with an open door welcoming them to their new school – a place where they can learn to count, to read, to find their voices and their dreams.

Remembering the widow and orphans