Immaculaee’s story was told to us with a smile. Our group first met her when we arrived to the Kigali City School to observe and to visit the classrooms we will be teaching in the following days. The school was beyond the chaotic bustle of the city streets and removed from the restlessness permeating the city air, for which I was thankful. I looked around, noticing how the earth came to life around me and was struck by the sheer beauty of Africa yet filled with the knowledge that I was a world away from everything I knew. Later, the school principal greeted us and whisked us away to different classrooms to introduce us to the students we would be working with. Standing up on the platforms in the classrooms, 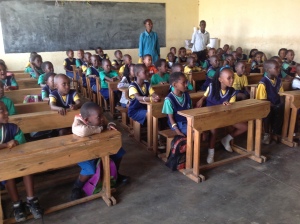 I felt as if I were cattle at auction being watched with curious yet friendly eyes. We walked back to the main building and I fell into step with one of the teachers. Even before I lifted my gaze to meet hers, I was hauled up, embraced and told in broken English, “My, my aren’t you a pretty one.” I couldn’t stop the smile that broke out across my face as I returned the embrace and thanked her. We walked arm in arm to the rest of the group and I learned that she was named Immaculee and was a French teacher at the school. She only spoke French and Rwandan but was learning English at a university. We arrived to the group and she separated from me to hug each and every member of our group, chortling with glee whenever she found one of our names funny. Later, she took me aside to show me the pictures of her kids and spoke about them with such fondness I was immediately struck by the urge to meet them and get to know them. Immaculee lost some of her vibrancy when speaking of her husband who would be going into surgery the following day, and someone in my group (Daria) told her “Komera”, which means to be strong and have courage in Kinyarwandan. This teacher that welcomed me with such enthusiasm and warmth set the stage for the type of people that I would meet as the day came to the end. I learned that however homesick or scared I was of the unknown, I would be welcomed and embraced with open arms during my time in Rwanda.