By: Veronica Lima, US Spanish Teacher

Veronica Lima was awarded a Faculty Travel Grant to Colombia over summer 2012.  The following is a description of her experiences and a preview of her plans in the classroom this year.

Unfortunately, Colombia is often the victim of some negative stereotypes.  It is also quite difficult to find teaching materials that don’t focus solely on Bogotá, violence, drugs and political unrest.  Thus, I set out to explore a very unique area of Colombia—the coffee axis, or El Eje Cafetero.  The eje cafetero is located to the west of Bogotá over the cordillera central (central mountain region).  It is made up of 3 main cities that form a triangle and that are connected by the “ coffee highway”.  The land and climate in the eje cafetero is perfect for coffee growing. 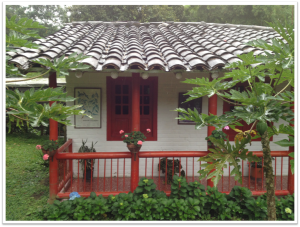 Our first stop was the city of Manizales, located quite high up in the mountains.  Manizales itself is an industrial city but is surrounded by coffee farms.  We spent the day on Finca Venecia where we hiked the grounds, learned about the picking process, saw the coffee beans being washed and dried and practiced cupping and identifying different roasts by smell.  Finca Venecia is a family owned plantation and many of the buildings and houses are original from colonial times.  While at the farms I learned some fascinating facts—For example, did you know that the US consumes more coffee than Colombia?  And that Juan Valdez is not a coffee company, but a national symbol that represents all of the country’s coffee growers?

We did spend some time touring the city of Manizales—we saw it’s main sites—the cathedral, a wooden church and, of course, the famous naked Bolivar statue (there are several in the coffee axis).

Our next stop in Manizales was El Recinto del Pensamiento—a retreat called the Place of Thought.  This was a beautiful nature preserve where we observed humming birds, butterflies and orchids, Colombia’s national flower.

After Manizales, we headed to Pereira, the warmest city in the coffee axis and also the city with the most universities in all of Colombia.  The country as a whole prides itself on providing a college education to all citizens.  The way tuition is determined was interesting to me—each family or individual is classified by social status based on household income and given a number from 1-6, (poor to wealthy).  Can you guess how much a student in level 1 is asked to pay for a year’s college tuition?  About $3.00!  Although Pereira is a big city, it is surrounded by coffee plantations, mostly family owned and operated.  We stayed at one called “ El Pueblito Cafetero” .

After Pereira, we journeyed to a picturesque town called Salento—this was definitely my favorite stop!  In Salento we stayed on a working dairy ranch, called Finca El Rancho.  The brightly painted walls, heavy wooden doors and howling night winds made me feel like I was right in the center of a Gabriel García Márquez novel!

In travel guides, Salento is often called the Switzerland of Colombia—I’m not sure about that since I’ve never been to Switzerland, but as I strolled through the town, with its vibrantly colored buildings, wooden balconies and stone streets, I certainly felt as if I had traveled back in time.

We also spent some time exploring the lands surrounding Salento and its numerous ranches and coffee farms.  I learned that about 12-15 years ago, before former Colombian President Alvaro Uribe took office, these lands were fully occupied by FARC, the Revolutionary Armed Forces of Colombia, and there was absolutely no tourism—it was much too dangerous.  In addition, I learned that the people of Salento tell many legends of the FARC violence and its connection with drug trafficking…It was surprising to me, especially as my goal was to draw the focus away from these stereotypes.  What I found, however, was that many Colombians continue to be just as fascinated, and even somewhat mystified by stories of rebel fighting and drug lords, as we are in the United States.  As we rode on horseback through this land, I couldn’t help but imagine what this area might have been like during the FARC occupation.

I haven’t mentioned much about the food, but I did eat and drink much more than coffee.  Salento’s specialty happens to be trucha con patacon—fresh river trout with a gigantic mashed and fried plantain! 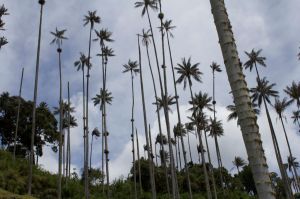 While in Salento, we took a day trip to El Valle de Cocora, the Cocora Valley, home to Colombia’s national symbol—the Palma de Cera, or wax palm.  In order to reach the valley, one must hitch a ride on a Willys, a typical jeep that can carry about 10 people.  When we arrived at the mouth of the valley, we were lucky enough join a hiking tour complete with a local guide. Here’s where I got my environmental science lesson of the trip!  Palmas de cera, or ceroxylon quindiuense, grow only in the high altitude of this valley.  They usually grow to about 50 meters, but the very tallest in the valley is 60 meters. The trees are now a protected species after facing extinction due to human interference.  The trunks were once used to make candles and the leaves were cut for palm Sunday celebrations.  Spending time amidst these trees was breathtaking and empowering.

From Salento we headed to Armenia, home to Colombia’s national coffee park and Panaca, an agricultural theme park.  As our taxi followed the windy path of the coffee highway, we passed numerous abandoned coffee farms surrounded by metal gates and punctuated by the Colombian flag.  Our driver explained that these were once the haciendas of many well know drug lords like Carlos Lehder, a co-founder of the Medellín cartel, and the Orejuela brothers…Although these properties now belong to the Colombian government, the legends and awe attached to them still intrigue most of the residents in the area.  Thus again, my hope to move away from these stereotypes was a bit compromised.

On our way back to the United States, we spent two days in Bogotá visiting a few museums.  The Gold Museum and La Quinta Bolívar, Simón Bolívar’s country home (now in the center of Bogotá) were the highlights.

I now have so much more to share with my students this year and I will be incorporating my experiences in a series of thematic units for both my Spanish 2 and 4 honors classes.  I hope to give my students an inside view into this lesser known Colombia full of natural wonders and legends.  Thank you to GFA and the Travel Grant committee for this amazing experience.

Colombia: A Journey Through the Coffee Axis