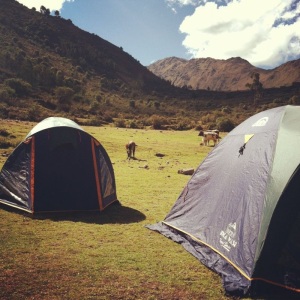 Thursday. It’s Thursday. Really?  That’s all I could say to myself this morning when I woke up in my camping tent at 7:30 next to Incan ruins, while wrapped up in my “mummy” shaped sleeping bag bought especially for this trip.

To explain, instead of our usual service work during the mornings and afternoons, our Wednesday was to be spent purchasing weavings, hiking 3 miles uphill, and camping beneath the stars (while freezing).

Wednesday morning Jazmin and I groggily woke up at about 7:20 in our beds in rural Piscacucho to get ready for our day in Ollantaytambo.  It was about 7:40 by the time we went downstairs to our outside sink to brush our teeth, and we both found it strange that Luiz wasn’t up yet, when he’s usually the very first one up.

A minute later, we hear knocking. We look up from the sink to find that Luiz was knocking on his own door…from the inside…After five minutes of confused chatter we both realize that Luiz locked himself inside his own room with the heavy lock.  After actually having to lean on the railing from laughing so hard and after explaining the situation to our host mother, we unlocked Luiz’s door and rushed through the wheat and potato fields surrounding our home to meet Savannah and Ms. Aniel at the school we were working at, along with a duffel bag that held all of our clothes and sleeping bags for our camping escapade (One bag! How?!). 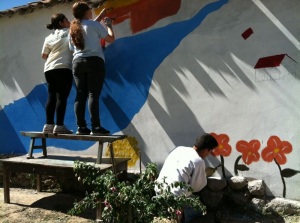 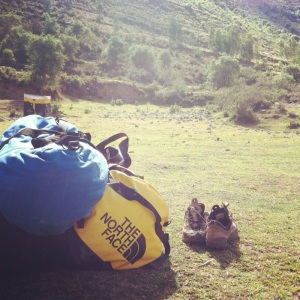 We were soon picked up by Adela, the country coordinator for World Leadership School, and discussed our morning activity, since our hike started late in the afternoon. We were in the local Ollantaytamban coffee shop when it was finally decided to take the bus all the way up 14,000 ft to the small town of Patachanca with our guides Sam and Felicia to learn about Awamaki, a Peruvian non-profit organization that supports local weavers and their craft. After Sam explaining the organization and how the women weave, we were able to browse and buy items sewn by the women.  All of the profits were invested back into the weavers.  Halfway down the stomach-churning road we were dropped off by the driver, said our goodbyes to Sam and Felicia, and walked down to the beginning of our hike. 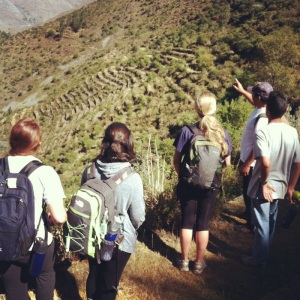 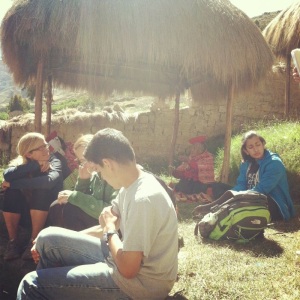 .
An hour and a half later and a good 400 feet higher we arrived at our camping site, surprisingly already set up for us. (Dear legs, I better have calf muscles made of steel by tomorrow!) After eating a heavy lunch and sun bathing, we climbed a bit higher and explored Incan ruins for about an hour and a half before climbing back down and being served with even more food, considered our “snack”.  We then played the ridiculously difficult French game of Jungle Speed before and after our dinner, then venture outside to see the millions of stars scattered across the sky (though only for a few minutes considering we were all frozen by the time we jumped into our sleeping bags). Miraculously, I managed to fall asleep after a couple of toss and turns, though the rest of my group was not as lucky.

The next day (Thursday?!), we all managed to stuff everything into our two duffel bags and set out on our 2 hour hike over the Ollantaytambo. The hike was much easier, considering we were taking a flat Incan path that hugged the mountains we were passing by. Now, we’re all sitting in the Coffee Tree cafè, gobbling up our rare Internet connection while waiting for our ceramics lesson. So far, I can easily say this trip has been active in both body and mind, so relaxing for a few hours is a savory lie treat before we head back to our farm at Piscacucho tonight. 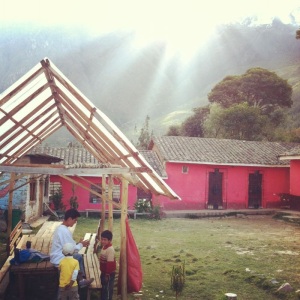 Personally this trip has taught me so much that I would have never thought about before. First off, my ridiculous homesickness that I felt during the first few days of the trip was such a surprise. Usually, I savor trips and time away from home, but not being able to talk, see or even videochat my family for such an extended period of time has had a profound effect on me. Even though I have gone on Builders Beyond Borders (B3) trips where I wouldn’t speak to or see my parents for a solid 8 days, B3 trips had so many people I was close with, and we were constantly busy during the entire day, so I never missed my family as I do now (Hi Mom! You can stop complaining about me not posting anything now 🙂 ).

Secondly, almost every night we have World Leadership curriculum sessions where we do different activities, such as Tuesday night when we ordered the UN Millenium Goals based on what we believed were most important, and we had to back up our reasoning as well. Or even this morning where we talked about how leaders aren’t only necessarily famous, and are in our surrounding communities, such as Adela, or our hiking guide Alfonso. 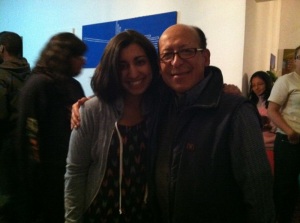 Thirdly, finally meeting Ronald was one of the best moments of the trip for me. Ronald is the author of several books that are a culmination of old Quechuan stories he has collected from elders over the years. He has translated all of the stories he’s collected from Quechua to Spanish, so that children will be able to understand the story and its lesson all while keeping the Quechuan culture alive. This past school year a couple of students in my Spanish class helped translate Ronald’s stories into English. Meeting him was amazing; he was an adorable little man who was a complete sweetheart and understood the importance if keeping culture alive for future generations. Lastly, I learned how little people can live off of and still enjoy every single bit of their lives. Our host family lives in Piscacucho, the smallest rural village I’ve ever seen; everyone lives at least a quarter mile away from each other. They have no Internet, a small radio and television, yet are able to live perfectly well and they enjoy every moment they have together.

So, although I’m surprised it’s already Thursday, it doesn’t mean everything has flown by me. There’s so much more to learn, and I’m ready to squeeze out as much as I can in the last 5 days we have.