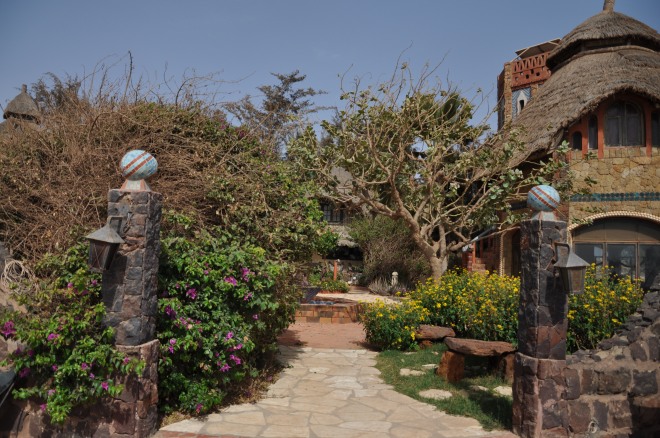 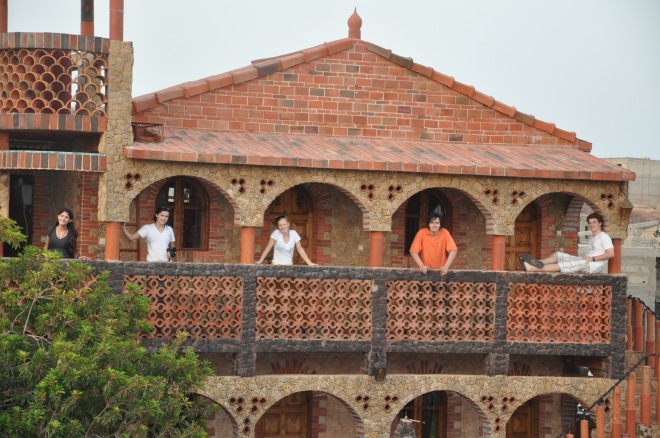 Our charming haven for art and relaxation: Sobe Bade at Toubab Dialow 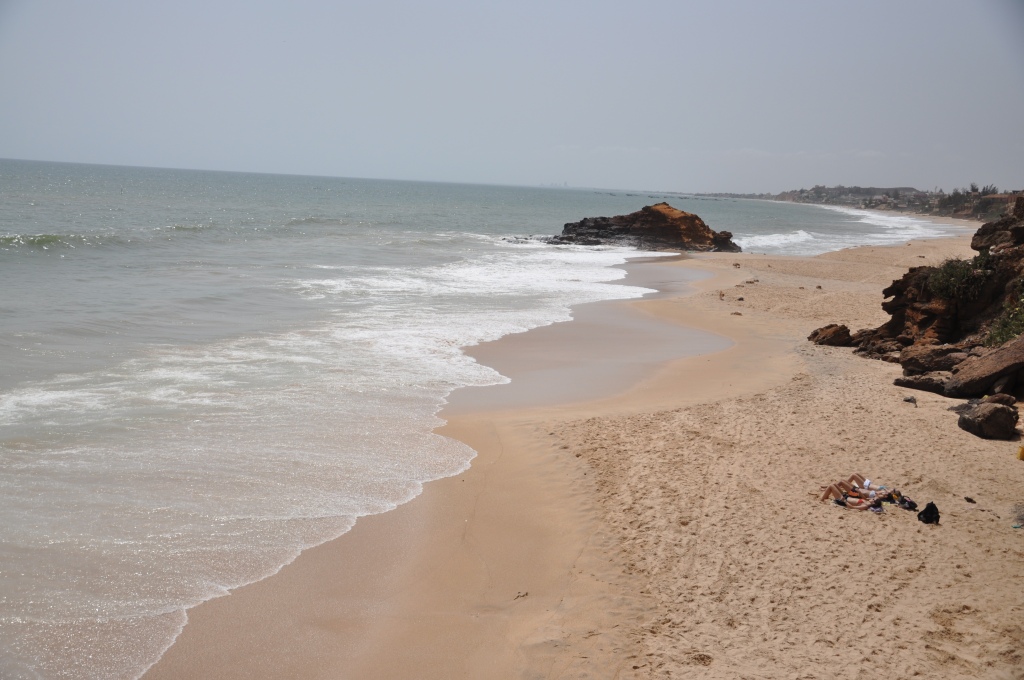 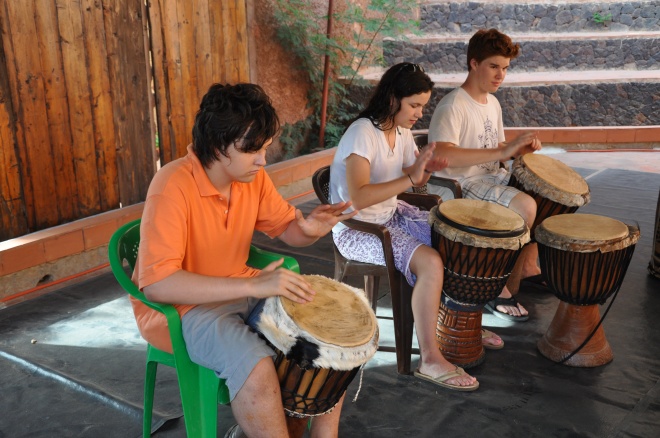 Toubab Dialow is a small village south of Dakar and our lodging was in a center for artists which had been established by a Haitian man who organized resistance to colonialism. He built a small community within the village with the villagers’ help. The gardens and flowers of the open air dining area were surrounded by the red brick of the small buildings. We crossed a small market square to get to our lodging built of the same red brick and wood in Senegalese style. There were grey, black, motley, speckled small grey, cats everywhere. Our room was on the top floor of the most easterly building. The first thing I noticed when stepping into the room was the heavy smell of incense; the size of the room is noticeable: small but comfortable. The third thing and by far the most important and the aspect I was most happy to see was the functioning shower. As Brian may have mentioned we had a bucket rather than a shower in our family home and the thought of having a real shower was a welcome one indeed. I spent a lot of time reading here so I won’t be saying that again just know I was doing a lot of reading.

Drumming on the djembe is very hard on one’s hands and you’ll know what I mean if you’ve ever done this: your fingers burn each time you smack down on the goatskin and when your fingers are removed they disappear in numbness. Meanwhile the bones in your thumbs ache and it’s hard to touch anything afterwards. It’s overall fairly painful to create the earthy sound of the djembe. I enjoyed it and Mme. Mapstone said I was really strong at it.

Batiks are died cloth colored in the negative spaces of wax drawing. Step One: take a cloth and a pencil and draw anything but be warned if it is too detailed it will be difficult to see the design clearly. Step Two: take a brush and hot liquid wax; use the brush to put the wax on the previously drawn lines. Step Three: choose your first color and your cloth will be dipped then dried. Step Four: as in step two take wax and a brush but color in with wax the area you want to keep in the first color. Step Five: choose another color and your cloth will be dipped. Depending on the quality of your batik you will have a beautiful wall hanging or a passable bandana; I was left with the latter.

Next morning at breakfast, we ate pain grillé avec chocolat chaud ou thé. The sky was overcast but things were mellow. Then from the east a very dark cloud appeared and moved west towards us at an alarming rate. Things got a bit tense as we realized that two storms were coming towards us; panic grew and Madame said that the plan to walk on the beach was abandoned and we headed for our rooms as quickly as possible. By way of performing an experiment I spread jam across a piece of bread and went back to my room. If we didn’t move quickly there was a chance we would walk right into the middle of the two storms. Our hotel gate appeared to be locked but Brian quickly got it off the latch. We ran through the courtyard and of course there were small cats everywhere. We ran up several flights of stairs when Brian said we’d left the key behind. But it was in his pocket. My eyes were hurting and my piece of bread was covered in sand. We had just been through a sand and rain storm. I videotaped the storm and got soaked. The rain passed.

We then headed to the animal reserve of Bandia. Giraffes are bizarre creatures that are very disproportionate. I’d never seen a giraffe before. I thought they were going to look like horses with long necks. Zebras look like donkeys with stripes. We saw the skull of a griot who was buried in a baobab tree. We saw gazelle, antelope, monitor lizards, ibex, hornbills, kingfishers, toucans, monkeys, ostrich, crocodiles, rhinos, wart hogs, something like a bird of paradise and many other animals among the vast expanse of acacia and baobab trees.

Then we headed back for our last night with our families. Jackson 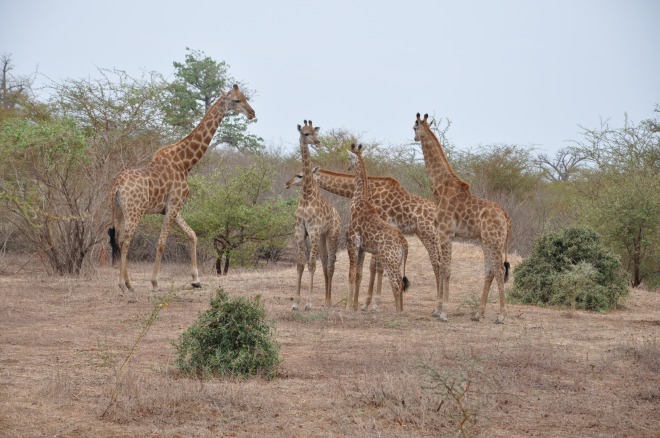 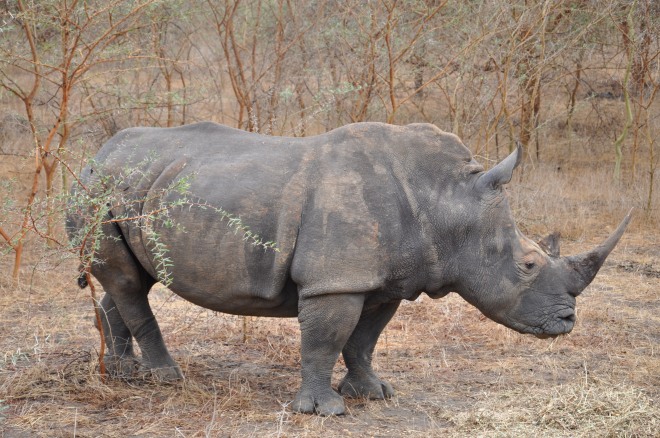 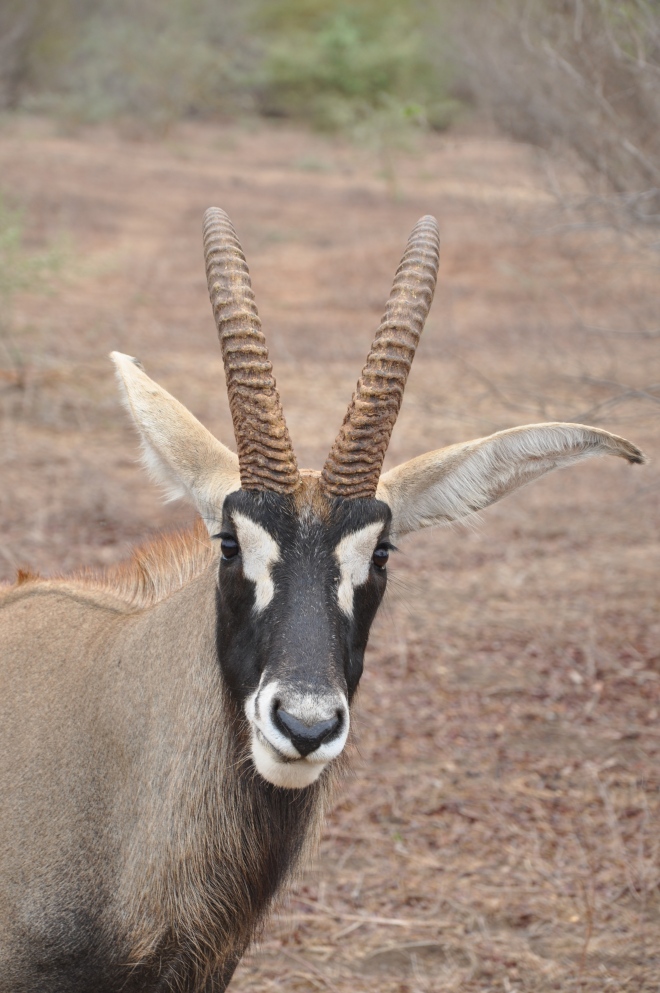 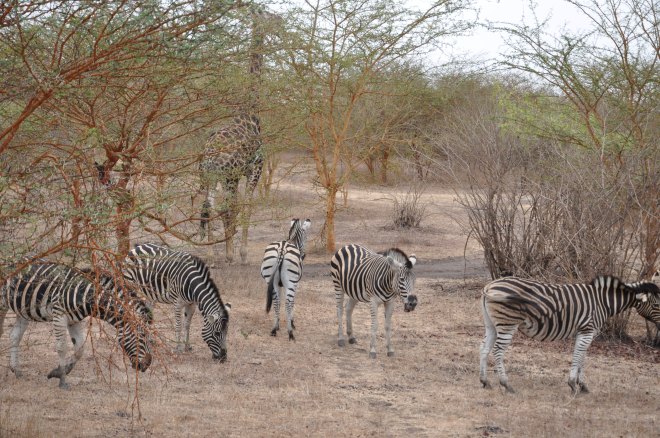