From February 17th to February 20th, a group of 20 GFA students participated in the 48th annual North American Invitational Model United Nations (NAIMUN). Through a wide range of committees, from massive General Assembly to pivotal new organs such as College of Cardinals, GFA students had the opportunity to explore international policy, the art of persuasion, and diplomatic procedures in our nation’s political capital. 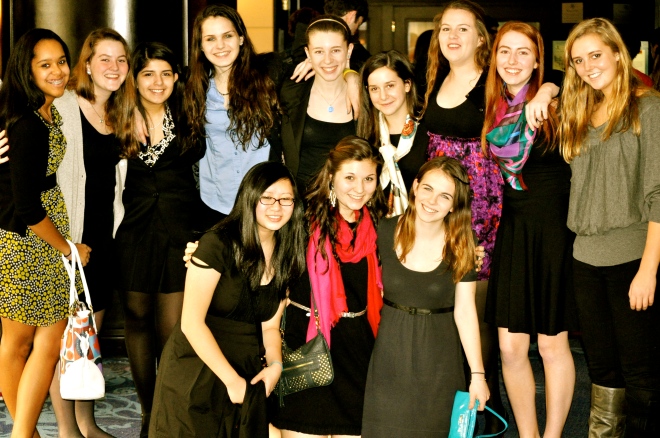 As a club that has recently tripled in size, our delegates participated enthusiastically, exhibiting their long hours of research and preparation. Committees ranged from General Assemblies and ECOSOC’s, which lend student delegates the opportunity to discuss world issues in a large and formal environment, to small crisis committees dependent on every delegate’s individual voice. Though the process was new for many of our delegates, they contributed with just as much knowledge and confidence as a real diplomat.

I (Regi) participated in the joint regional crisis committee on the Restructuring Pakistani Democracy.  However, unlike other committees, we represented Pakistani interests circa 1969, when the nation was geographically separated into East and West provinces by India.  I played the role of a delegate in East Pakistan, now Bangladesh, right before the 1971 liberation war.  I represented Aktar Mukul, a radio talk show host who was a propagandist in East Pakistan for the Awami League, the secessionist political party. As a secessionist, I fought for East Pakistani independence and true democracy. Our committee was kept up to date by a constant flow of crises ranging from cyclones that destroyed cities to freedom strikes. Part of the challenge of our committee was to incorporate these crises into debate, as if we really were politicians dealing with the changing situations of East Pakistan in 1969. The climax of my committee was during one of our final Joint-Regional Crises when an East Pakistani representative stood up and declared our independence.  For the remainder of the committee sessions, the other East Pakistani delegates and I created a Constitution for the new nation of Bangladesh where, in the new government, I was appointed Minister of Communications.

I (Isabelle) was a member of the Colombian Cabinet, a simulation of President Santos’s current cabinet of ministers and ambassadors. We were a small committee of twenty or so representatives, ranging from Commander of the Armed Forces to Ambassador to the United States, all presided over by a Georgetown student acting as President Santos. Every twenty minutes or so, new crises would interrupt our debate, from a heightened presence of FARC or ELN members in major cities to humanitarian disasters on the Venezuelan border. As delegates, we were challenged to address each problem from many angles, always taking into consideration the position of our respective ministers, the power of the drug cartels, land reform, and paramilitary groups. I represented the Minister of Culture and Communications and was charged with releasing propaganda and press releases to inform and motivate the people. The highlight of our committee occurred during the midnight crisis, when, all of a sudden, a paramilitary group representative took me hostage for an hour and a half. While I was captive, the rest of the community worked to meet the demands of the ELN while I sent messages to different military leaders and pressed the drug cartels to play a part in saving me. The fast-paced and current aspect of this crisis committee encouraged creative thinking and diplomacy in a time-sensitive surrounding.

Throughout the entire NAIMUN conference, the majority of the moderators were Georgetown students, especially from the School of Foreign Service, eager to talk about their experiences at the college and make this experience worthwhile. Not only did the University play a part in the committee portion of the conference, but it also lent its own organizations to entertain the students. For example, Georgetown students treated delegates to performances from coed a capella groups as well as various Georgetown dance troupes. The active involvement of the Georgetown University students made us feel that we were part of something larger than ourselves.

Since the conference was located in Washington DC, we had the chance to explore a city where real political and international actions happen, as we experienced similar procedure and decorum as real world leaders. The hotel, situated on Connecticut Avenue near Dupont Circle, made the rest of the city easily accessible as both a resource and a backdrop for world policies. To have the chance to learn about world issues in our nation’s political capital  was truly rewarding.