During last year’s spring break, I traveled with my dad to South Africa. Dr. Bruce Walker, director of the Institute for AIDS Research at Harvard, MIT, and Massachusetts General Hospital, invited us to spend time with him and his collaborators in South Africa. Our base was in Durban on the east coast. I had the great privilege to interact full time, for more than a week, with the extraordinary people that are trying to fight the illness and poverty that plague South Africa. More than half of the world’s HIV/AIDS population lives in Africa, 63% of whom are children. In South Africa only 10% of people with AIDS are receiving life-saving antiretroviral drugs.

There are three programs in particular that have taken creative approaches to deal with this daunting situation. The first is located at an AIDS and TB ward at Edendale hospital, which is often called the “ground zero” of the South African AIDS epidemic because it is the largest government treatment site.. 90% of people hospitalized at Edendale have TB and AIDS and only about 40% will survive their hospitalization. At Edendale, in addition to traditional doctors they are using “TB warriors” to combat the spread of disease. These “warriors” have no formal medical training but they know a sick person when they see one, so they identify and “fast track” the sickest patients amongst the hundreds of people that come to the hospital clinic each day. A major breakthrough was when local traditional healers were integrated into the system. These healers are trusted in the community and speak Zulu. They have been given certification to be AIDS/TB counselors, and they bring the sick people in the townships to the hospital. All of these strategies: the use of Zulu counselors, the outreach programs, the use of triage warriors, were thought up by iTeach – Integration of TB Education and Care for HIV/AIDS. Two remarkable women run the program: Krista Dong, an American trained doctor from our neighbor town of Wilton, CT, and Zinlhe Tabethe, born in Durban. 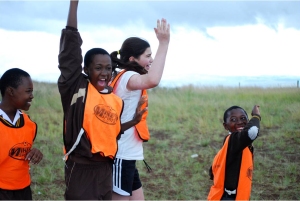 Africaid Whizzkids United: uses soccer as a metaphor to teach life skills and health lessons. In soccer, just like in life, you need to set goals and make a plan, and have the motivation to carry it out. You need to pick the right teammates. All of these are important to win in soccer but also to succeed in life. Soccer is the most important sport in South Africa, and it was the site of the last World Cup Tournament just two months after our visit. The Africaid Whizzkids counselors visited the public schools of KZN once a week, at the end of their classes. These kids are at the beginning of adolescence when, of course, risk of catching AIDS is just beginning The kids debate very frank subjects such as: whose responsibility it is to make sure contraception is used; or whether boys can have 2 girlfriends, but not the reverse. The girls debated at least as fiercely as the boys- I was proud of them! And of course, we played some great soccer!

CAPRISA – Center for AIDS Program of Research In South Africa funds on–the-ground projects, rather than laboratory research. Its headquarters is at the Nelson Mandela School of Medicine, where we met with the co-director of the program, and, Mendesa, whose grant proposal had just been funded. Mandesa’s proposal was to set up a learning and counseling center for AIDS Orphans at the site of her mother’s home and burial ground. Even after apartheid ended, the newly elected black leaders of South Africa denied that AIDS was a problem in their country. At an official conference where the President of South Africa was meeting with another Head of State, Mandesa’s mother publicly announced that she had AIDS. When she returned to her township, she was stoned to death. Mandesa had to run away to Johannesburg and was raised by a pastor and his wife and was now returning to the townships of Kwazulu Natal to carry out her mission. We visited AIDS orphans in what look like regular homes with women who act like regular moms to these babies.. At the Lamontville township you can see the bare-bones shelters that people live in. I volunteered at the regular school taught in English, and visited the Sunday school where Bible skits were translated into Zulu for the preschool kids, who had not yet learned English in school.

This trip was, for me, an amazing, life-changing experience. After growing up in Fairfield County, my exposure to this other world of poverty and sub-standard health-care was initially very difficult and shocking , but I feel that I am still absorbing these experiences whenever I think back on them. Knowing there are so many creative and caring people working on these problems gives me great optimism for the future. I now truly understand why young people like me, who have had it so good in life, should aspire to help the less fortunate in a different part of the world. Our lives will be enriched at least as much as those of the people we are helping and befriending.